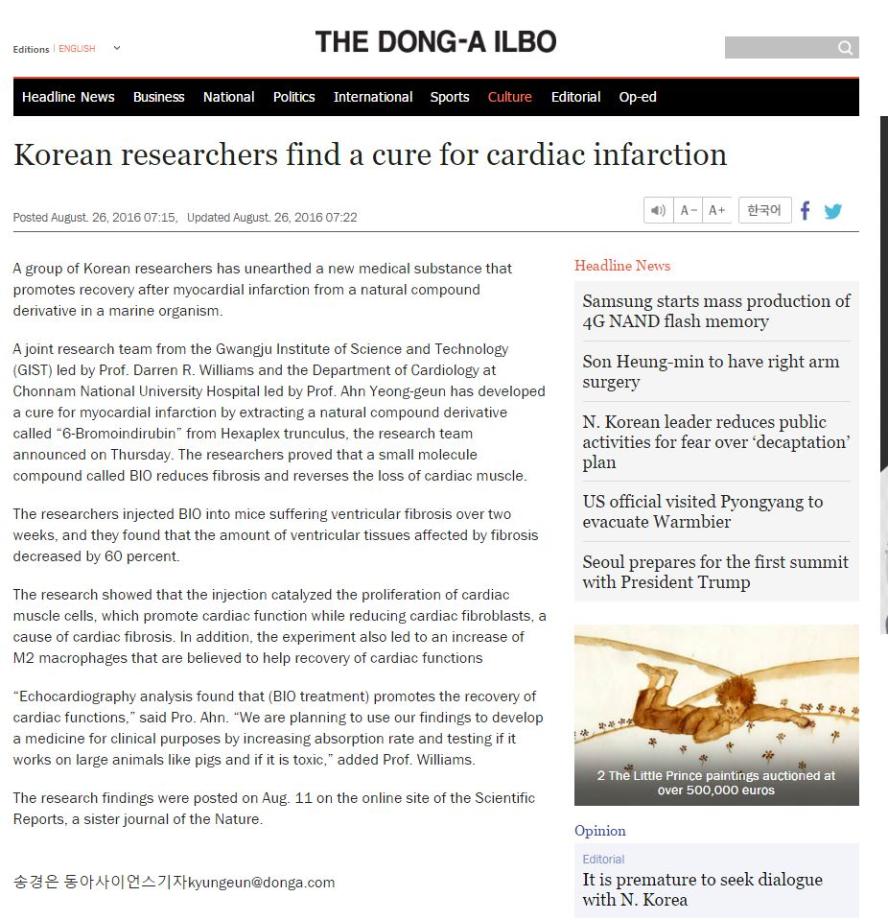 A group of Korean researchers has unearthed a new medical substance that promotes recovery after myocardial infarction from a natural compound derivative in a marine organism.
A joint research team from the Gwangju Institute of Science and Technology (GIST) led by Prof. Darren R. Williams and the Department of Cardiology at Chonnam National University Hospital led by Prof. Ahn Yeong-geun has developed a cure for myocardial infarction by extracting a natural compound derivative called “6-Bromoindirubin” from Hexaplex trunculus, the research team announced on Thursday. The researchers proved that a small molecule compound called BIO reduces fibrosis and reverses the loss of cardiac muscle.
The researchers injected BIO into mice suffering ventricular fibrosis over two weeks, and they found that the amount of ventricular tissues affected by fibrosis decreased by 60 percent.
The research showed that the injection catalyzed the proliferation of cardiac muscle cells, which promote cardiac function while reducing cardiac fibroblasts, a cause of cardiac fibrosis. In addition, the experiment also led to an increase of M2 macrophages that are believed to help recovery of cardiac functions
“Echocardiography analysis found that (BIO treatment) promotes the recovery of cardiac functions,” said Pro. Ahn. “We are planning to use our findings to develop a medicine for clinical purposes by increasing absorption rate and testing if it works on large animals like pigs and if it is toxic,” added Prof. Williams.
The research findings were posted on Aug. 11 on the online site of the Scientific Reports, a sister journal of the Nature.