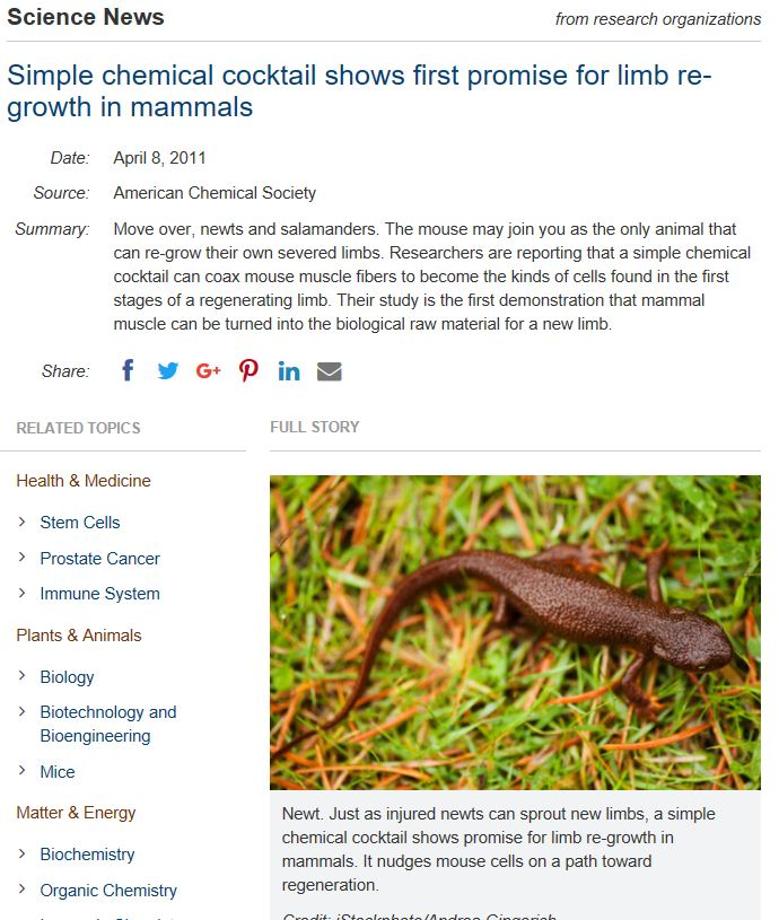 Newt. Just as injured newts can sprout new limbs, a simple chemical cocktail shows promise for limb re-growth in mammals. It nudges mouse cells on a path toward regeneration. Move over, newts and salamanders. The mouse may join you as the only animal that can re-grow their own severed limbs. Researchers are reporting that a simple chemical cocktail can coax mouse muscle fibers to become the kinds of cells found in the first stages of a regenerating limb.
Their study, the first demonstration that mammal muscle can be turned into the biological raw material for a new limb, appears in the journal ACS Chemical Biology.
Darren R. Williams and Da-Woon Jung say their "relatively simple, gentle, and reversible" methods for creating the early stages of limb regeneration in mouse cells "have implications for both regenerative medicine and stem cell biology." In the future, they suggest, the chemicals they use could speed wound healing by providing new cells at the injured site before the wound closes or becomes infected. Their methods might also shed light on new ways to switch adult cells into the all-purpose, so-called "pluripotent," stem cells with the potential for growing into any type of tissue in the body.
The scientists describe the chemical cocktail that they developed and used to turn mouse muscle fibers into muscle cells. Williams and Jung then converted the muscle cells turned into fat and bone cells. Those transformations were remarkably similar to the initial processes that occur in the tissue of newts and salamanders that is starting to regrow severed limbs.